A day before the Hawaii State Board of Education holds a special meeting on several key items, including school reopening guidelines and telework for educators during the pandemic, the Hawaii State Teachers Association raised serious concerns that the state Department of Health’s new guidelines for the safe opening of schools are unsafe and much less stringent than federal guidelines.

“The state’s guidance, while citing the federal Centers for Disease Control (and Prevention), does not use the CDC metrics,” said HSTA President Corey Rosenlee at a news conference Wednesday. “Instead, it looks like the numbers to reopen schools were used to justify sending students back to campuses across the state, instead of following the CDC recommendations and looking at the research.”

“The Superintendent must request a rationale from the DOH on how it determined its Learning Model Parameters, including any scientific data on which it is based and an explanation of how it aligns with CDC’s 'Indicators for Dynamic School Decision-Making,' and the Superintendent must include this rationale in the Reopening Plan for the purposes of transparency and addressing public concerns.”

“The rationale for the metrics is ill-defined, and public school educators appreciate that the BOE will be discussing them on Thursday. HSTA is deeply concerned that the DOH metrics are wrong and complex area superintendents are already using them in decision making regarding school reopenings,” Rosenlee said.

On Monday, the two complex area superintendents (CASs) who oversee schools in the Honolulu District—Farrington-Kaiser-Kalani and Kaimuki-McKinley-Roosevelt—announced their decision to allow an increase of students on campuses starting in the second quarter. Schools in the Kaiser Complex, for example, would begin with in-person instruction for kindergarten, 6th, and 12th grade. The Kaimuki-McKinley-Roosevelt Complex Area would allow for upwards of 25 percent of students to return to campus while other students continue with distance learning or participate in blended rotations. That contrasts with the Kalaheo and Kailua CAS on the Windward side of Oahu, who announced that students will be distance learning through the second quarter.

In their letters, the Honolulu CASs referenced the ability to reopen schools based on Superintendent Christina Kishimoto’s announcement that the HIDOE will be using the “newly released guidance from the Hawaii State Department of Health.”

Unfortunately, the state’s guidance—announced in mid-September—allows 10 times as many coronavirus cases in the community as the CDC’s guidance, and it’s not clear why. 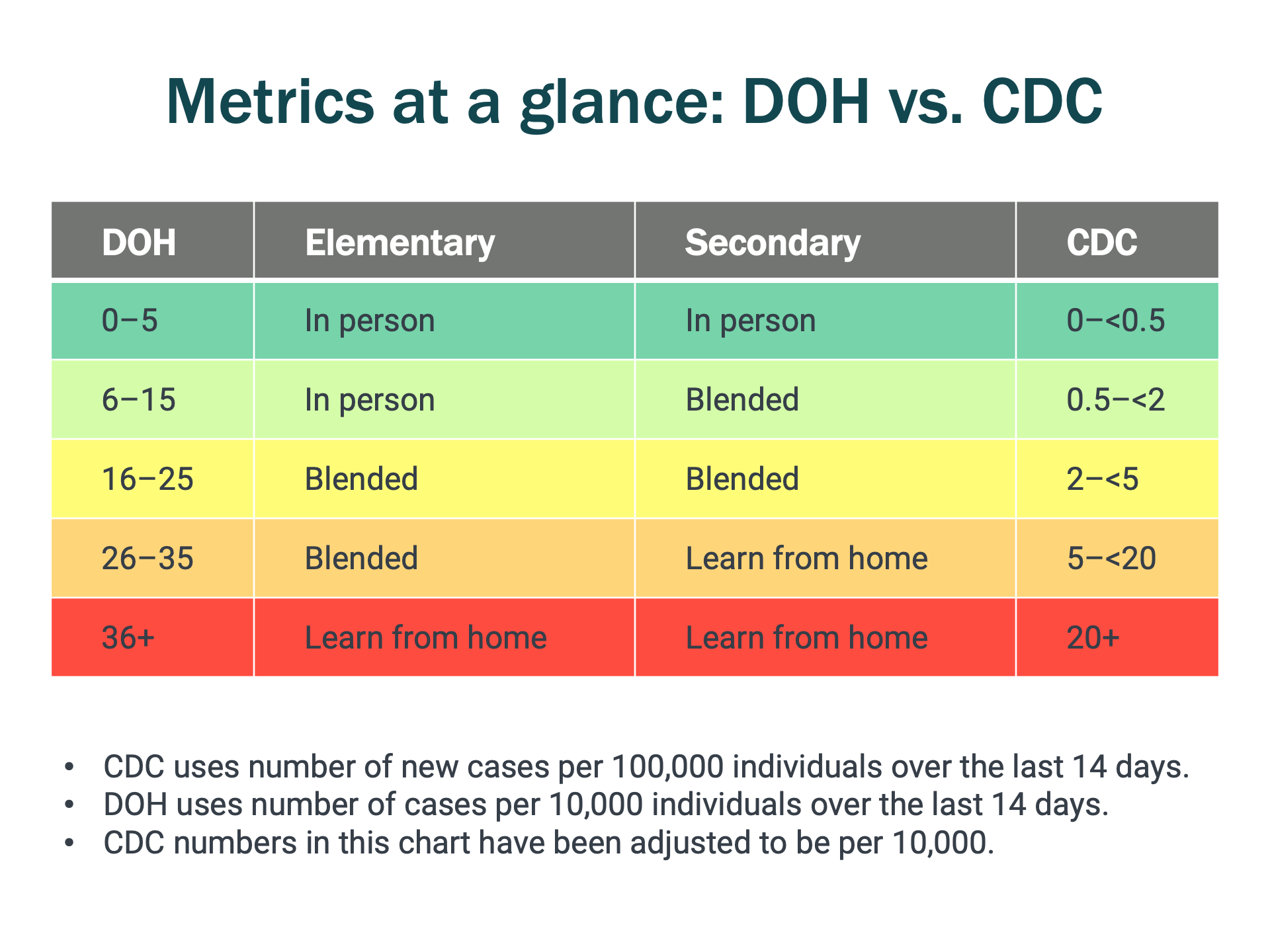 Each row specifies the metrics that would dictate in-person, blended, or learn-from-home models for elementary and secondary students. In all five rows, the pattern is evident: The DOH allows many more cases in the community than the CDC does. For example, the CDC considers 20 as the benchmark for the most severe status, full distance learning shaded in red. The DOH uses that same number to allow blended learning for elementary and secondary, shaded in yellow—two tiers lower in risk than the CDC. 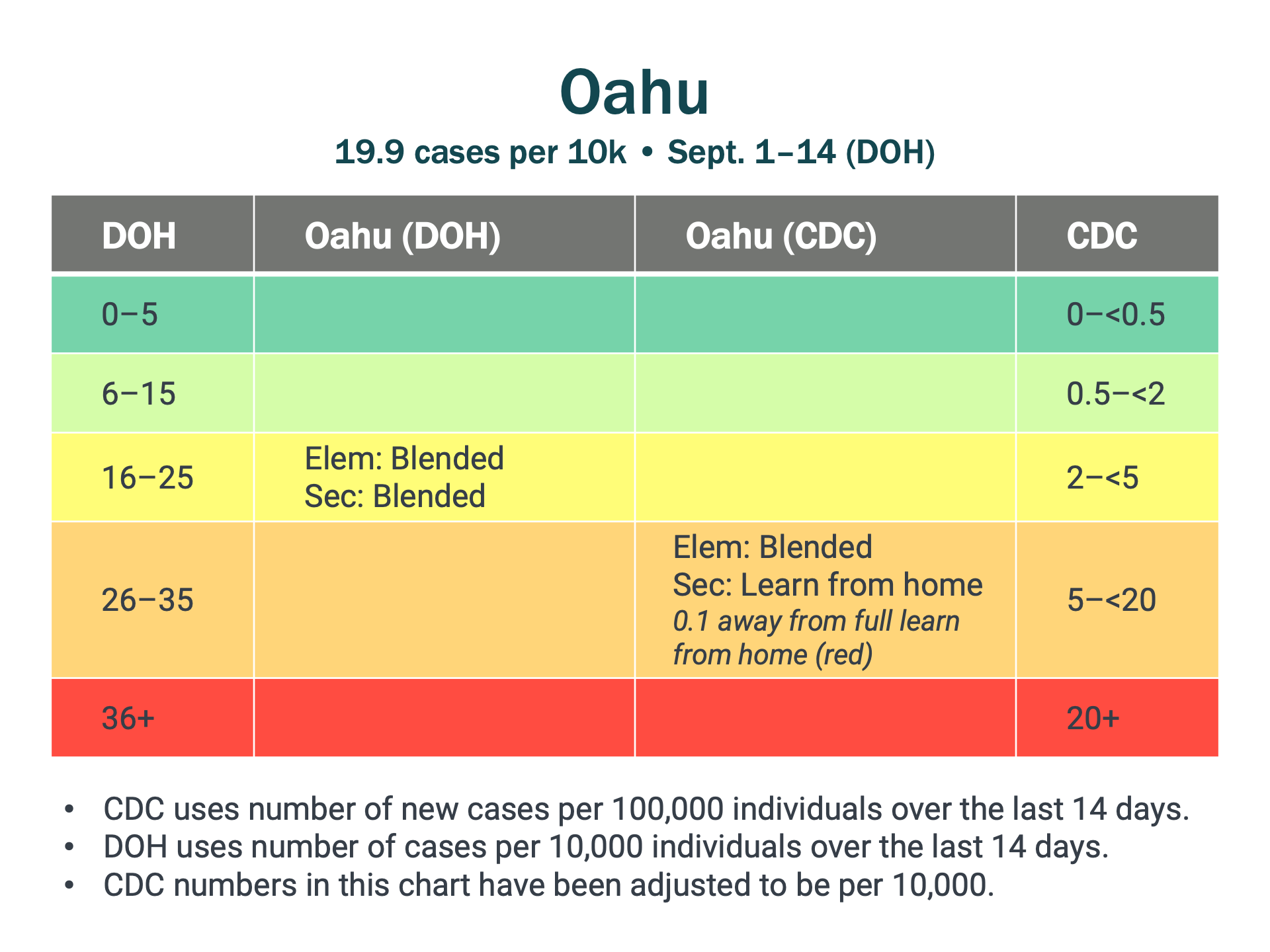 Our chart above uses data for the City and County of Honolulu. According to the DOH, the total case count equaled 19.9 cases per 10,000 individuals over a two-week period from Sept. 1–14, which, according to its metrics, allows for blended learning for all students. The CDC, however, would only allow blended learning for elementary students and keep all secondary students at home. Also under CDC standards, Oahu’s 19.9 would be just one case away from distance learning for all students.

The state DOH also failed to include other metrics from the CDC that are important to determine if schools can reopen, including hospital inpatient beds and intensive care hospital beds that are occupied, and the percentage change in new cases.

“Why did the health department fail to include these other crucial metrics that other states and schools districts are using? It appears that the state was going for the bare minimum, so they could justify reopening schools in spite of continued dangers from community spread,” Rosenlee said.

“HSTA does not know how the DOH reached their numbers, why they are different from the CDC, and why the DOH did not include other metrics from the CDC. Before students are allowed back into the classrooms, the DOH should have to justify these numbers,” Rosenlee added. 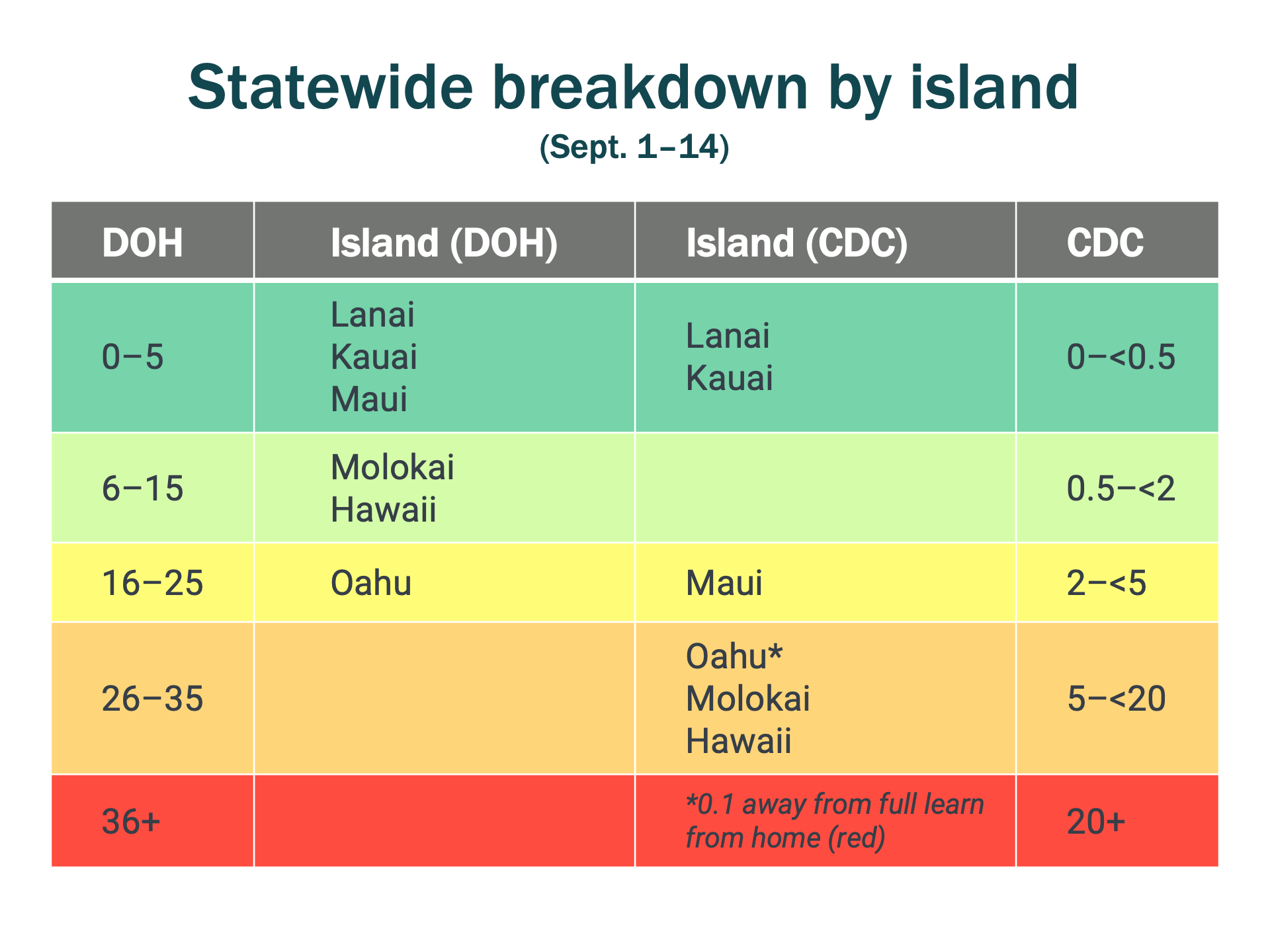 The above chart shows how DOH metrics and CDC metrics would impact each island with radical results.

The CDC metrics would put Molokai and Hawaii Island in the second highest category, while the DOH model puts them in the second-lowest category. Molokai did open some schools for face to face, and since has seen an increase in cases.

As a note, even though Lanai is in the lowest category, the small community would not be able to get enough substitutes if teachers took leave or got sick.

Sadly even the CDC numbers have to be questioned, as on Tuesday the New York Times reported the pressure the White House placed on the CDC to reopen schools and soften reopening standards.

When asked when our schools will be ready for students to return, Rosenlee replied, “The answer is we don’t know. Most large districts across the country are using distance learning right now, some plan on opening in the next few weeks or months. The large school districts that have opened have either had to close back down or seen a rash of cases.

“The children and teachers of Hawaii can’t be guinea pigs in this experiment. Patience and safety must be our guiding principles. Before we risk our children and their lives, we must be sure the science supports our policy,” Rosenlee concluded.