On Maui, educators who are parents worry their own children’s ‘education system is failing them’ 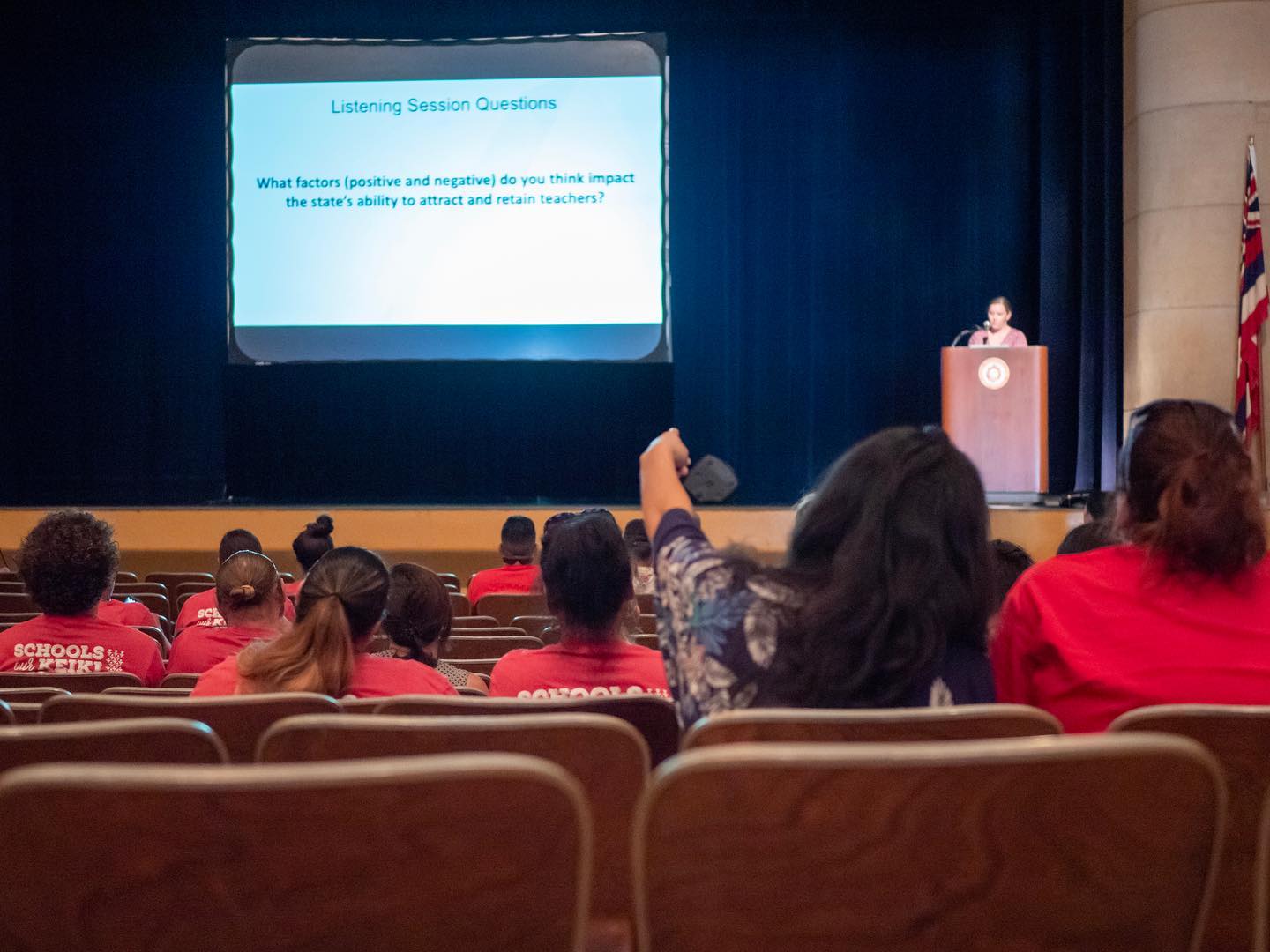 Like so many teachers who moved to Hawaii from the continental United States, David Negaard, an English teacher at Maui’s Baldwin High School, took a big pay cut. Negaard said his salary dropped by about $30,000 when he arrived on Maui from a Los Angeles area school district seven years ago.

“I have no regrets, but looking at those numbers is staggering,” Negaard said during a Hawaii State Department of Education listening session held Wednesday at Baldwin as part of the state's teacher compensation study.

About 70 Valley Isle educators showed up to tell representatives from a Denver-based education consulting firm how difficult it is to live in Hawaii on low teacher pay and to suggest ways things can improve for teachers and students.

When it comes to teacher salaries, “we need to see radical movement, and it needs to be upward,” Negaard added. “Do it because it’s right. It’s what’s best for our kids.”

Compression is a big problem for many educators

For instance, teachers who’ve been on the payroll in Hawaii over the last 12 years or so, during furloughs and the recession when the state gave no step increases, have been frozen on the pay scale, while educators who started in the last five or six years have seen across-the-board pay raises or step increases every year. The problem is even worse for 20-year teachers, whose increases stopped during bad economic times and they are closer in step to colleagues with just 10 or 12 years in the system.

HSTA President Corey Rosenlee told the educators gathered in Baldwin’s auditorium Wednesday night that, “we’ve been asking year after year to fix the step problem because we know how bad it is.”

The HSTA negotiated a 14-percent pay increase over four years for educators, Rosenlee said, but “no way is that near enough.

“We need to continue to push together as a union. It’s not because the union hasn’t been trying hard enough to do these things. We have to continue to do more,” Rosenlee added.

Local girl moves home to many frustrations with the DOE

A curriculum coordinator at Wailuku Elementary, Reene Hatakeyama decided to move home to Maui a few years ago after teaching for 13 years in Tacoma, Wash.

Not only did she take an $18,000 pay cut her first year back on Maui, but “the application process to come to teach in Hawaii is cumbersome,” she said. “The DOE does not talk to the Hawaii Teacher Standards Board. It was a nightmare just to apply to teach here.”

Hatakeyama had several suggestions to improve teachers’ situation in Hawaii.

First off, she said professional development in Hawaii needs to be free, as it was for educators in Washington state.

Hatakeyama said, “I didn’t have to pay $150 for each PD class. I didn’t have to get it preapproved by my principal, I didn’t have some gatekeeper saying, ‘Yes, this counts as payable PD.’ I didn’t have a portfolio that I had to submit to further prove that I am a competent teacher, to prove that I was worthy” of the professional development credits that allow her to reclassify and increase her pay.

She also said the state needs to change the PD structure.

To help educators cope with Hawaii’s sky-high housing prices, Hatakeyama suggested a cost of living allowance similar to the military and federal employees in Hawaii.

“The military can do it. We’re serving our children. Why can’t we get a COLA?” she asked.

Melinda Martinez teaches language arts to seventh-graders at Maui Waena Intermediate. She created a colorful pie chart to show how little discretionary money she has left each month on her $53,000 salary. 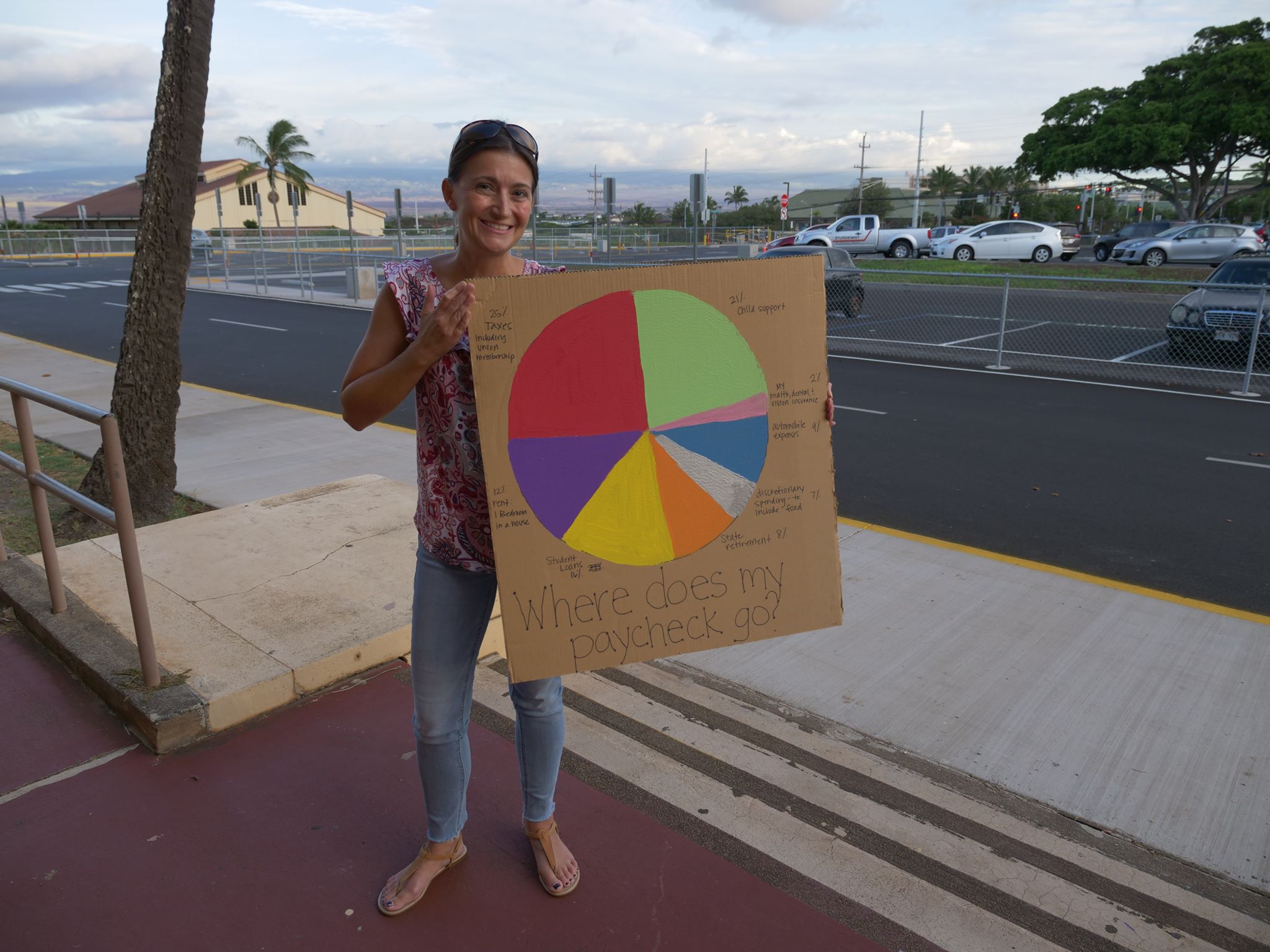 Martinez said she has only about seven percent of her income left for basic expenses such as food and clothing, and she has reached this sad conclusion: “I will die a teacher along with my student loans.”

John Fitzpatrick, a science teacher at Maui Waena Intermediate, said since teachers generally are paid about $15,000 less a year than other professionals with comparable levels of education, a raise of $15,000 would be a good start.

He also said the state needs to improve its professional development offerings for neighbor island teachers, offering them more opportunities to improve their practice and qualify for higher pay. Fitzpatrick said he had to fly to Oahu and rent a car there to take a PD course, which cost him an extra $450, plus the $150 cost of the PD course itself.

Jodi Kunimitsu, a math teacher at Maui High School, whose husband, Lester, teaches at Baldwin High, says they can’t afford to buy a home on Maui.

“We can’t get people who grew up here to become teachers, because they see how little we’re paid, how overworked we are,” Kunimitsu said.

A WalletHub study just released Monday found that Hawaii teachers, whose pay starts at $49,000 and maxes out at $89,000, are the lowest paid in the nation, factoring in the 50th state’s high cost of living.

His wife, Megan, teaches at Nahienaena Elementary. The couple has taught in the islands for 16 years.

“The only way we’ve been able to survive out here is through a series of second jobs that we’ve each had, whether it’s waiting tables, cleaning condos, or working at Honolua Surf Company, or driving shuttle buses to the airport,” Landes said, “and I’d really like to spend some time with our children before I have to go to my second job. So I have to grade some papers while I’m here, while I’m listening” to his colleagues at the session Wednesday evening.

“I wanted him, since he was born here, to know where he’s from and to respect the culture,” she said.

“His first year, in kindergarten, he had two different long-term substitutes, because they could not get a qualified teacher in that position,” said Morrison, “and that’s not something we’re going to be able to recruit from the mainland, Hawaiian speakers, so we need to find them here. … It’s really sad.”

Hatakeyama, who moved back to Maui with her husband and three children, said, “I uprooted them to come home to raise them in the aina, to raise them with their culture, to raise them with their ohana, but their education system is failing them. My children deserve highly qualified teachers who are specialized in their area, who are compensated appropriately, so we can feel good about what we do. We can inspire the next generation to continue excellence.”

“My son deserves a certified teacher for every year that he’s in school,” Hughey said.

Educators also said the teacher shortage crisis has a lasting negative effect on their students.

Negaard, the English teacher from Baldwin, said, “I have students who have had one to three years of core classes with substitutes for the entire year or 70 percent or more of it. I have students who therefore lack basic skills that they need to perform well in my class… and they lose.

"For every year that they are not properly taught, they lose context. They lose that sense of connection with the wider world that we all have to deal with,” Negaard added. “They are crippled in their interactions on a day-to-day basis with the broader world.”

Here are some solutions, including “do something!”

Teachers made other suggestions for improvement, including:

“Otherwise, this is just a complete waste of everyone’s time,” Landes said.